Competitive sprinting is one of the oldest forms of British motor sport and can be traced back to the early 19oo’s. The aim is to complete the 440 yard or quarter mile course from a standing start in the shortest possible time.
The event is organised for classic motorcycles and cars and is staged on Victoria Avenue with the course running on the land side from West Park towards First Tower.
Motorcycles are split into two sections, those manufactured prior to 1994 and those manufactured after 1994 and within these sections there are numerous classes based mainly on engine capacity and the machine has been modified from normal road use. Likewise the cars are split into various sections and classes, the two main sections being pre 1995 and post 1995.
All vehicles and equipment have to be checked to satisfy the official scrutinizers before being allowed to compete and entrants must have competition licences from the Auto Cycle Union (ACU) and Motorsport UK (MUK).
With sprinting getting a good start is all important, a poor start and you never really catch as the clock always seems to run that bit faster when you are at your slowest! Correct alignment and positioning at the starting line is important and marshals are there to help and place a chock against the rear wheel.
Once the green light comes on a competitor has one minute in which to start, during which time care must be taken not to nudge the timing beam, as this will start the clock "prematurely".
A few hundredths of a second lost in the first 20 or yards can often result in a couple of tenths, by the time the finishing line is crossed.
A good start requires maximum revs whilst feeding in the clutch, which is not as easy as it sounds. "Dumping the clutch" too quickly in a car and the back wheels just spin up to no great effect, other than to create a lot of tyre smoke, which may be spectacular, but not what is really needed for a good time!
With a motorcycle, rear wheel spin is not generally a problem, as virtually all of the weight of the bike and rider is transferred onto the back wheel, which gives good grip, however the front wheel can come up dramatically to produce an unwanted "wheelie".this happens the natural reaction of the rider is to dip the throttle, thus losing power and time, hence riders will be seen leaning well forward over the tank and handlebars in order to avoid or minimise wheel lift.
After the start, it comes down to holding onto an open throttle and changing gears near the maximum rev limit. A good gear box is essential as a missed gear can easily occur, especially when operating at maximum revs. The gearing of the machine ideally needs to be optimised for the distance, to provide for good acceleration at the start and good terminal speed at the end.
Competitors are always looking for that "one really good run", when everything goes perfectly.
All vehicles are electronically timed over the quarter of a mile and terminal speeds recorded, which can easily exceed 100mph, the time is also recorded for the first 62 feet, which is mainly of interest to competitors when analysing their performances.
To set a or personal best is the ultimate if only by one hundredth of a second! Weather conditions can play their part, and competitors will be hoping for warm dry tarmac, and a tail wind!
The perfect run can be illusive and is much harder to achieve than might seem to the casual observer. The event is staged on Victoria Avenue, starting at and runs until approximately 11.oopm, which should allow for one practice and three official runs.
Entry is free for spectators and the venue offers some excellent vantage points and amenities.
A stroll along the promenade is highly recommended and will enable close viewing of the cars, bikes and competitors in the pits area, as well as taking in the spectacular sights and sounds. 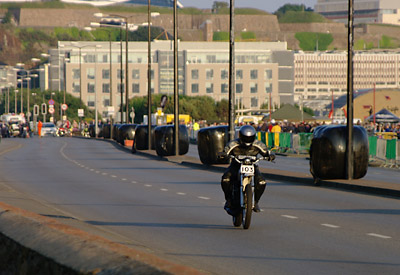 Looking back to the start 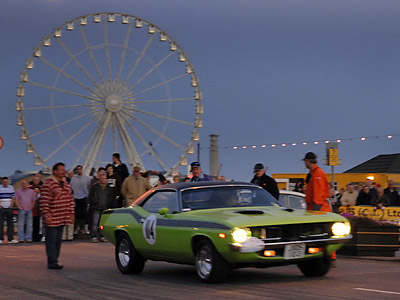 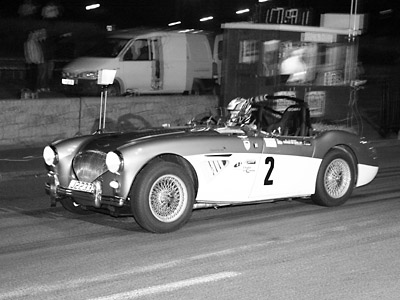 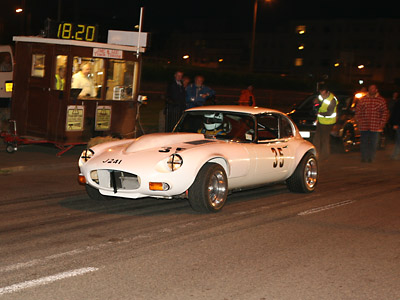